We all have something we dislike about our bodies. But what happens when that irritation turns into an obsession?

Sandeep Saib has suffered from Body Dysmorphic Disorder (BDD) since 2012. It has completely disrupted her everyday life, especially “those three key periods – so your breakfast, lunch and dinner” she says.

“BDD is a mental health disorder where you just can’t stop thinking about one or even more flaws or perceived defects in your overall appearance”, Sandeep explains. “It’s a personal flaw that only you see within yourself. You feel very alone with it.” According to OCD UK data, current estimates are that 0.5% of the population in the United Kingdom have BDD, which equates to 5 out of every 1000 people. Sandeep already suffers from OCD (Obsessive Compulsive Disorder) and Anorexia nervosa; as she points out “the majority of people going through BDD will have underlying conditions related to anorexia nervosa or eating disorders.” Suffering from these, she highlights, “could affect their brain capacity or brain activity in general. They will have anger outbursts or become forgetful, or their brain just won’t understand things”.

But what are the signs to look for in someone suffering? “Changes in mood, behaviours, and attitude are key signs. Sandeep says. “Another sign would be dramatic weight loss or weight gain or a change in body appearance, constantly looking at mirrors, closing themselves off and not socialising with any friends and family. The majority of them just want that external approval, that what they see is what they want to hear from other people. It’s sort of a self-fulfilling prophecy where you want to see what you are thinking.”

Sandeep’s condition has a huge impact on her day-to-day life, especially when she encounters her reflection. “If you’re walking out and about and you just so happen to take a glance at yourself you take stock of that, and you’re there for a while, not just observing for a few minutes here and there” But not all people with BDD behave this way – in a recent BBC3 documentary Ugly Me: My Life With Body Dysmorphia, BDD sufferer Lianne explains that “one thing people with BDD talk about is whether they are mirror gazers, people who get stuck in the mirror or the people who just avoid mirrors completely.”

Social media is, of course, a big part of almost everybody’s lives, with the latest figures from Statista show that there are 3.78 billion social media users worldwide. And Sandeep thinks that social media may have a huge negative impact on BDD sufferers.

“Body Dysmorphic Disorder causes you to look at social media constantly”, she exclaims. “There is a lot of filtering yourself, changing your appearance, editing your body and the way you look, to be perceived as someone different. When you don’t want to be the person you are mentally and physically, you try to create an alter ego online where you feel like you can depend on that.”

So why do people do this? “It can be for many reasons: to look good, feel good because of the compliments you get. Your peers are doing it as well, which encourages you to get on the bandwagon.” But as Sandeep points out, there are many dangers. “There is also a lot of bullying that happens online, a lot of comparing. There is this idea of ‘perfection’, an ideal body and so forth. Social media doesn’t help with that because young people tend to follow celebrities and key figures out there and they don’t help themselves because what they see is constantly in their news feed.”

Social media can be so damaging that Matthew Schulman, a plastic surgeon in New York, claims that “patients have been coming in with Snapchat filtered selfies to show what they want done to their body.” This extraordinary behaviour shows how much social media can influence the way we feel we should look.

So why don’t people who are suffering just avoid seeing that type of feed? “They can block them or mute them, but they don’t do that. Maybe there is education and training needed, maybe more needs to be said.” Says Sandeep.

When I asked young people how much social media influences them, 19-year-old Kaiyus Walton told me: “I think the whole kind of social media image, the idea you have to have to have this body to get all these likes, is ridiculous. I tend not to pay attention to their bodies and compare it to mine”.

However, gender may be a factor here. The girls I spoke to didn’t find it as easy to ignore the way bodies are represented on social media. Zoe, a 17-year-old frequent social media user, said “social media actually impacts everyone’s life whether they believe it or not. I just feel like if you do see a pretty girl in a bikini you always compare yourself, and that is the start of Body Dysmorphia.”

17-year-old Ruby agrees. “Instagram is especially harmful to young users, as it’s all based on gaining likes and followers. Society shouldn’t just be based on wanting people to like you and follow you and to do that you have to show off your body.”

As an experiment to see what kind of messages the media is giving girls and young women, I visited my local supermarket and looked at the magazines. The same kind of headlines appeared again and again: “11 Easy Ways to Get Your Best Brows Ever”, “13 Secrets to Long, Thick, Shiny Hair”, “17 Healthy Ways to Lose Weight Fast”. Exposure to such beauty routines can send a negatively suggestive message to young readers and could suggest to them that they have to live up to this beauty standard and that could be the start of someone becoming diagnosed with BDD. 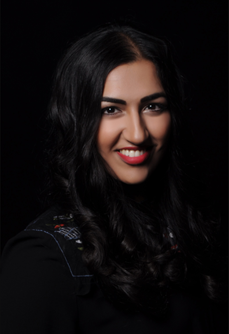 But fortunately, with the right treatment BDD can be managed. Professor David Veale, a Consultant Psychiatrist in London specialising in Cognitive Behaviour Therapy says: “it’s not something you can’t reverse; it just takes time to redevelop new ways of thinking”.

So how does Sandeep try to overcome this illness? “First you have to actually be aware and recognise you have a problem and that’s key, because I guess if you don’t recognise and admit that you have a problem, then you won’t be able to make progress and change yourself for the better.” But of course, this isn’t easy. “It does take a lot of courage and a lot of strength”, Sandeep stresses. Therapy or counselling is also a key way to try and overcome BDD as it is important to speak openly about it, especially to professionals. The NHS recommends Cognitive Behavioural Therapy (CBT):  a kind of talking therapy which you have either on your own or in a group. They also recommend Selective Serotonin Reuptake Inhibitors (SSRIs), a type of antidepressant.

In fact, after an eight year battle with her condition, Sandeep began therapy last week. It was a difficult experience. “I was teary, I was in tears by the end of it. I feel like I haven’t made any progress but I have in one way, and I guess that after that session it got me really thinking and I just felt really low and depressed and just cried it out.”

Sandeep feels that the only way to make real progress is to switch off. “I used to have several tabs on my internet browser regarding celebrities, online gossip and news”, she reflects. “Try your hardest, it doesn’t happen overnight, challenge yourself to try and remove those tabs one by one and whenever you do challenge yourself always make note of how that made you feel.”

Her advice to sufferers? “Young people use social media as their safe-haven or ‘safe space’ for them to mingle, network and connect. But I’d encourage those that are going through BDD, a month or so away from social media, take a social media holiday and see how you feel. You won’t know unless you try. And if you are still keen on using social media, use it in the right way!”

“It’s so important to reward yourself when suffering with BDD, always treat yourself and be mindful of self-care. There’s always a time when BDD sufferers punish themselves mentally and physically, they put their body through hell and back on a daily basis. Just take a step back and realise what makes you happy!”

If you feel like you or someone you know could be going through this disorder and need support please contact: 0300 311 22 33.